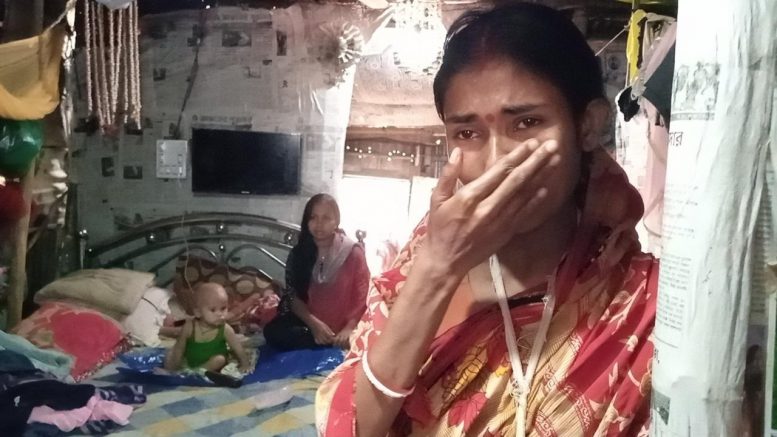 “All the gold and money saved for my two daughters’ marriage has been taken away. I was saving money for them as my husband could not work. Now how will I live?” said a teary-eyed Jharna Rani Das (55) of Noagaon village in Shalla upazila of Sunamganj. 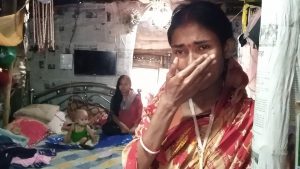 After the Covid-19 pandemic had started, she returned to the village in April last year, with her two daughters who were working in a garment factory in Dhaka.

Jharna was preparing to marry off one of her daughters.

Following a Facebook post on March 17, locals in support of Hefazat-e-Islam, carried out vandalism and looting in the Hindu-dominated village.

Jharna Rani Das, the victim of the attack, is now terrified.

In a hushed voice, she said, “I am staying away for a while. I sent my daughters to their uncle’s house. There is a fear that someday this might happen again.”

Not only Jharna, but 90 families in the village have lost everything.

Their homes and furniture were destroyed in the attack and they lost valuable assets and money.

The only thing they now want is safety.

“I am safe now, but Thakur knows what will happen next,” Kanak Rani Das told The Daily Star.

While the dust may never settle on this incident, what led up to it, what followed and where we are at now are all important questions that need answering.

In the two cases filed over the incident, 34 people, including the main accused Shahidul Islam Shadhin, a resident of Nachni village and a member of Sarmangal Union, have been arrested.

Shalla Police Station Officer-in-Charge Nazmul Haque said two police outposts have been set up for the security of the residents of the village.

It all began at Noagaon village in Shalla upazila, which is located at one end of the adjoining Dirai upazila.

Hefazat-e-Islam held a rally in Dirai on March 15 where its Amir Junaid Babunagari and Joint Secretary General Mamunul Haque were present.

The next day, on March 16, Jhumon Das, a young man from Noagaon, posted a status on Facebook criticising Mamunul Haque. The post sparked discussions among supporters of Hefazat-e-Islam in Kashipur, Nachni, Chandipur and Santoshpur villages of Dirai upazila near Noagaon.

Then came the sudden mobilisation.

On that very night, thousands of people gathered at the local Dharain Bazaar following announcements from some mosques and maktabs of the villages.

“There was an announcement in the madrasa-mosque during Esha at night – ‘We are obedient to Islam; they destroyed our Islam; we will march’. Later they stated a procession,” Manful Begum of Nachni village told The Daily Star.

“I saw people gathered again around 7 in the morning. They were making announcement using our mosque’s mics from a procession, then all the boys and children of the area went there.

“There was announcement in the madrasa. Later, I heard that Noagaon was attacked,” Manful added.

Then on the morning of March 17, several thousand people gathered at Dharain Bazaar near Noagaon and attacked from the opposite side of the village, according to police and villagers.

Locals and the administration said the morning rally was pre-arranged, which The Daily Star confirmed.

Local member Bishwarup Das and others told villagers at a gathering in a local market that there would be no attacks if Jhumon Das was detained.

Jhumon was arrested from Shanskhai Bazar around 9pm and handed over to the police by the people of his village. Then Shalla Upazila Chairman Chowdhury Abdullah Al Mahmud assured the locals of no further trouble.

Contacted, Jhuman’s wife Sweety Chandra Das said, “Everyone was saying that since the upazila chairman was coming, there was no problem. Even then, we did not expect an attack. ”

The night before the attack, Shalla upazila Chairman and Habibpur Union Chairman Vivekananda Majumder Bakul and members Bishwarup Das and local representatives of Dirai’s Sarmangal Union were able to bring the situation under control, locals said.

They managed to control the outrage. Things seemed safe.

The next day [March 17], while the police and administration were busy celebrating the birth anniversary of Father of the Nation Bangabandhu Sheikh Mujibur Rahman, thousands gathered in Dharain Bazaar. Then, they attacked.

Shalla Police Station OC Nazmul Haque said, “We were reassured by the locals last night. Even then there were police patrols in the area at night. We hurried to the spot when we heard that people had gathered at Dharain Bazaar while we were placing flowers at the portrait of Bangabandhu in the morning. But as it is a remote area, it took us about 40 minutes to get there.”

Shalla Upazila Nirbahi Officer Al-Muktadir Hossain told The Daily Star, “The agitated people were calmed by the upazila chairman, the previous night. They then told him that the next day they would go to the Sadar Upazila with a procession. That was it. But the attack was not planned, it was a surprise.”

The first attack was on the temple at Dharain Bazar. Even the freedom fighters from the village were tortured and humiliated, locals said.

THE ATTACK WAS NOT DUE TO PROCESSION

After the attack in Noagaon, Shahidul Islam Shadhin, a resident of the neighbouring village of Nachni and a member of the Sarmangal Union Parishad, and his associate Pakkon Miah were named as the attackers.

At the same time, the conflict between them and the residents of Noagaon over the Kuchakhai pond next to the village also came to light.

It was learned that Haripada Das, a resident of the village, complained to the upazila administration when Shadhin, also a lessee of a pond, was preparing to fish in the water and that he also constructed a dam there in January.

However, Lima Akhter, Shadhin’s niece denied this. She said, “For many years, the pond has been on our lease. There are always problems due to complaints. But there was no conflict in Noagaon over this incident.”

Haripada Das also said that the procession was not the main reason, rather the communal motive of Hefazat supporters were.

WHO IS MAIN ACCUSED SHADHIN?

The day after the Noagaon attack, Habibpur Union Chairman Vivekananda Majumder Bakul filed a case and the police filed another case which mentioned Shahidul Islam Shadhin as the main accused and 1,500 unidentified persons as the accused in another the case.

Shadhin was arrested by the the Police Burea of Investigation from Kulaura in Moulvibazar the day after the case was filed. Later, a court sent him on a five-day remand.

Initially, it was confirmed that Shadhin was a Jubo League leader and union Jubo League president, but the organisation has denied it.

His family members, however, have claimed that he has no relation with Hefajat and that he is a Jubo League leader.

Khairul Huda Chappal, convener of Sunamganj District Jubo League, told The Daily Star, “Since 2008, there has been no Jubo League committee in Dirai and Shalla upazilas. Shadhin is not a Jubo League leader nor was he in any previous committees.”