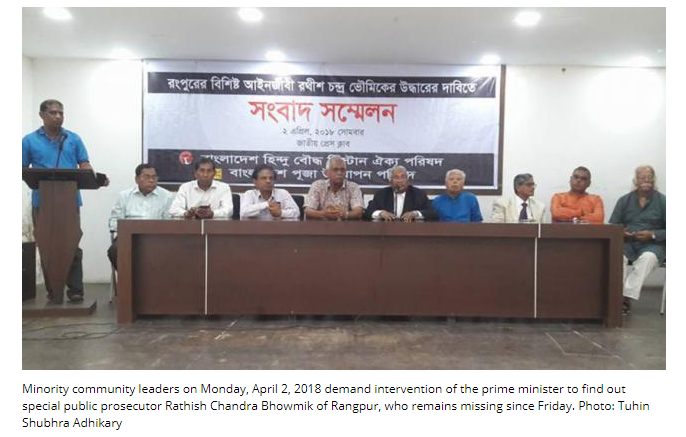 “We will block the main roads in all districts of Rangpur and Rajshahi divisions for an hour from 10:00am on April 7,” Rana Dasgupta, general secretary of Bangladesh Hindu Bouddha Christian Oikyo Parishad, said at a press conference at Jatiya Press Club in Dhaka today.

“We will observe the same programme on the same time in all divisional headquarters to intensify the pressure on the government to rescue Rathish,” he said.

On March 30, Bangladesh Hindu Bouddha Christian Oikyo Parishad from a human chain in Dhaka gave the government a 24-hour ultimatum to find out Rathish Chandra.

The administration failed to rescue Rathish within the given time, Rana said adding, “They (the administration) surprisingly remain silent which made us more concerned”.

“We suspect that religious fanatics abducted him (Rathish) to create panic among the minority communities. We also feel insecure ahead of the next parliamentary election,” he said.

Advocate Rathish Chandra Bhowmik, 55, who represented the state in cases over the murder of Japanese national Hoshi Kunio and Rahmat Ali, khadem (caretaker) of a shrine, has been “missing” since Friday morning. 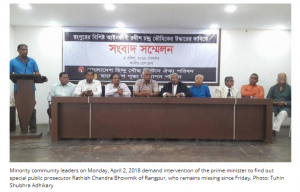