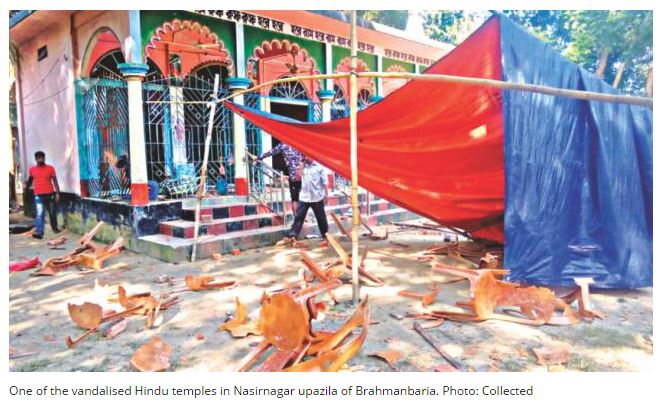 Mayhem in B’baria- Around a hundred houses, 5 Hindu temples vandalized, dozens injured in attack by religious zealots over a Facebook post

A group of religious zealots yesterday carried out a synchronized attack on the Hindus in Brahmanbaria’s Nasirnagar upazila, vandalising around 100 homes and at least five temples and looting valuables over a Facebook post “hurting Muslims’ sentiment,” victims and police said.
The attackers also beat up over 100 people of the minority community.The nearly two-hour long attack began around 12:00pm before police brought the situation under control after 2:00pm.

Police detained six people from the spot and were trying to arrest the other attackers, he said.

As the news of the Facebook post spread, violence spilled over to the neighbouring Habiganj district where a Hindu temple in Madhabpur bus stand area came under attack.

There, the attackers vandalised a Kali idol when devotees were worshipping at the temple for Dewali.

On information, local UP Chairman Ali Ahmed rushed to the spot and called the police.

Muktadir Hossain, OC of Madhabpur Police Station, said they were trying to arrest the culprits.

Earlier in the morning, Ahle Sunnat Wal Jamaat, an Islamic group, held a rally protesting the Facebook post in Sadar Upazila, a quarter kilometre from where the attack happened.

Some locals blamed the protesters for the attack, which the rally organisers denied. They blamed some “criminals” from Nurpur village for the incident.

“A group of Hefajat-e Islam men attacked the Hindu community and vandalised their homes and temples when we were holding a peaceful rally. Islam is a peaceful religion. It never supports any clash. We demand trial of the attackers,” said Riazul Karim, convener of Nasirnagar unit of Ahle Sunnat Wal Jamaat.

It all began with a Facebook post purportedly from the account of Rasraj Das, 27, of an edited photograph that shows an idol of Hindu God Shib on the picture of Kaba.

Later, locals caught the youth and handed him over to the police on Saturday noon. Police filed a case against him.

Earlier on Saturday morning, Rasraj in a Facebook post said he had nothing to do with the photo and offered an apology.

“At first, I am apologising to Muslim brothers because someone has posted a photograph from my account without my knowledge. When I came to know yesterday night [Friday] from Mamun bhai, Ashu bhai and Bipul about it, I deleted it immediately,” he said in the post.

“Here we live side by side as Hindu-Muslim brothers, and I have no such mentality and, of course, I don’t have such impudent courage. Why should I? I think no one has that mentality and no one should. Besides, our Muslim brothers provide all-out support for our different programmes … I don’t know how such a photograph was posted and who did this. So, I am apologising to all,” the post added.

Interestingly, Rasraj is from Haripur Union, about 12km from the place of the attack.

In a similar incident, religious fundamentalists attacked the Buddhists community in Cox’s Bazar’s Ramu in September 2012, claiming that a Buddhist youth insulted Islam on the Facebook.

An investigation by The Daily Star later found the Facebook post was faked to justify the attack.