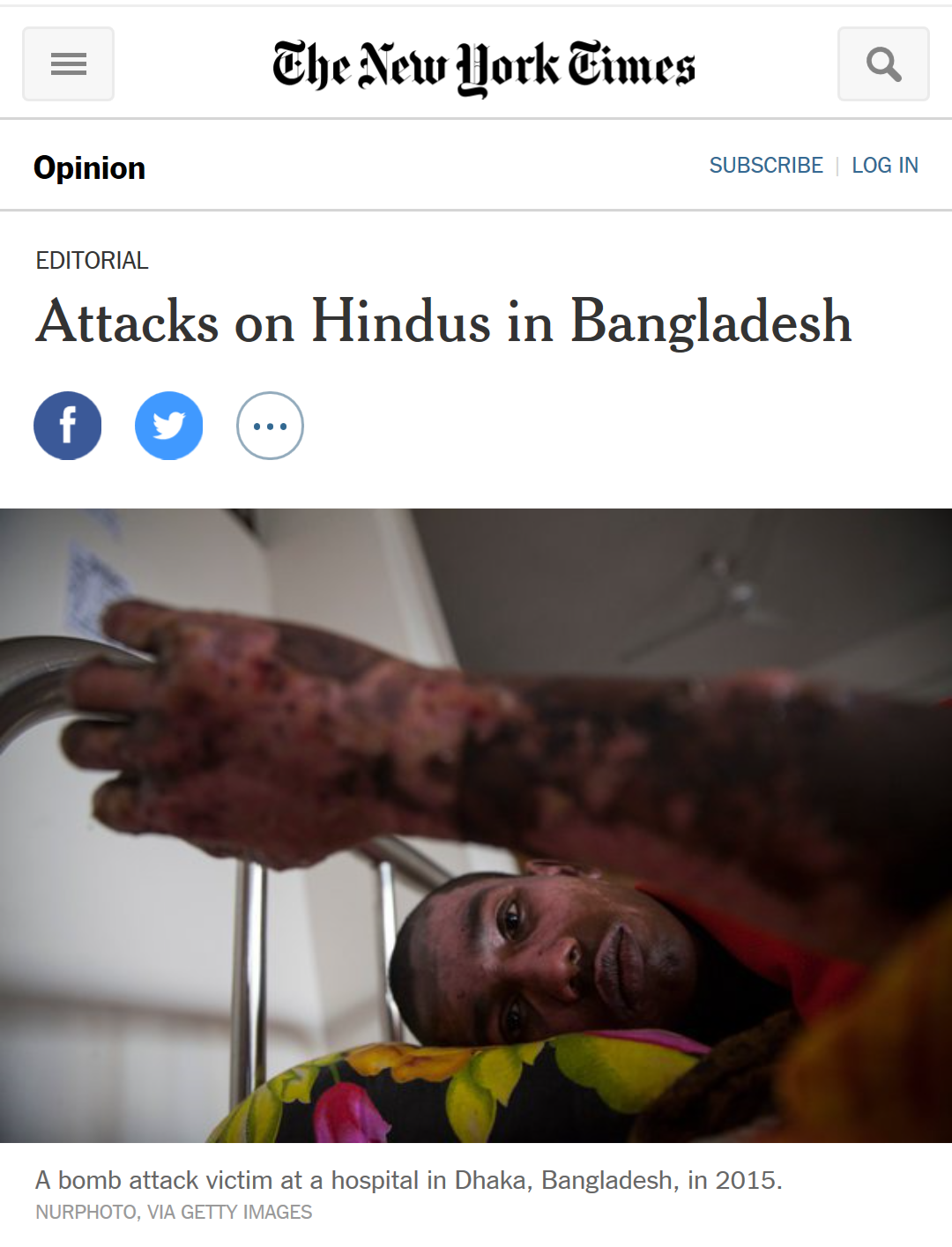 By THE EDITORIAL BOARD
November 16, 2016
The New York Times

Over almost two years, radical Islamists have carried out a string of brutal attacks in Bangladesh, killing scores of bloggers, foreigners and members of religious minorities. A Hindu tailor was killed in April, and a Hindu priest was hacked to death in July. A terrorist attack in Dhaka in July left 22 people dead. Prime Minister Sheikh Hasina and her governing Awami League party have accused the Islamist opposition of fomenting this terrorism. In this context, the news that Awami League politicians may be implicated in recent attacks on Hindu homes and temples is profoundly disturbing.
The attacks were set off by outrage over an image on Facebook depicting the Hindu god Siva at a Muslim holy site in the city of Mecca. On Oct. 30, hundreds of angry Muslims ransacked 15 temples and the homes of more than 100 families in a Hindu neighborhood in Nasirnagar, northeast of Dhaka. The police did not intervene. Other attacks on Hindus took place across Bangladesh.

Rasraj Das, a Hindu man, was accused of posting the image and arrested. But, on Nov. 6, Bangladesh’s minister of fisheries and livestock, Sayedul Hoque, said: “Rasraj Das didn’t upload that image demeaning religion in Facebook. According to an intelligence report, it was posted from Dhaka,” though by whom is not clear.
A Bangladeshi Supreme Court lawyer and civil rights activist, Jyotirmoy Barua, has warned that social media is being used in Bangladesh to foment violence against minorities and that “users who are not very tech-savvy” are susceptible to having their accounts hijacked. Mr. Rasraj, who is illiterate, appears to be a pawn in someone else’s dangerous game.

Dozens of suspects in the attacks have been arrested, and the police officer in charge in Nasirnagar has been suspended from his duties. Bangladesh’s National Human Rights Commission has begun an investigation into the attacks, calling them a “preplanned conspiracy.” While the Awami League has suspended three local leaders for their involvement in the attack, a thorough investigation must determine who exactly was responsible for posting the offending image, and to what end.

The Awami League prides itself on being the party of pluralism in Bangladesh. Local Awami League politicians involved in a conspiracy to stir religious violence must face more than suspension from their party. The credibility of Ms. Hasina’s government is on the line.