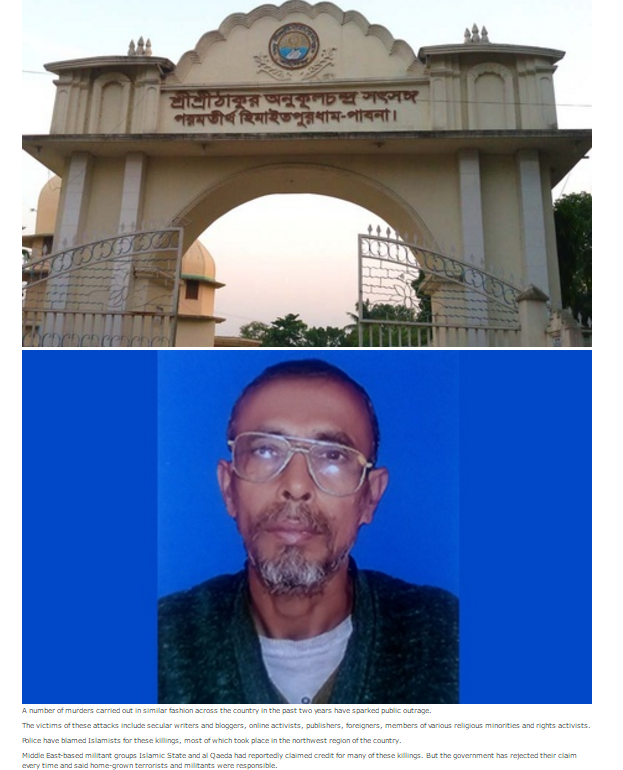 His murder, only 200 yards from the ashram and near the Pabna Mental Hospital main gate, comes after the killings of a Hindu priest in Jhenaidah on Jun 7, and a Christian grocer in Natore and a decorated SP’s wife in Chittagong on Jun 5 in similar fashion.

Police have formed a five-member team to look into Pandey’s murder.

SP Alamgir Kabir said the team, headed by Additional SP Liton Kumar Das, had been asked to submit their findings at the earliest.

Pandey had been working at the ashram as a volunteer for the past 40 years. He was attacked during his regular morning walk.

Police said the assailants hacked on his neck and head from behind. The nature of hacking indicated that the assailants were trying to decapitate Pandey.

Pandey’s murder in Pabna took place nearly at the same time when police launched a seven-day crackdown on militants throughout Bangladesh Friday morning in the backdrop of the recent spate of killings.

The ashram’s General Secretary Jugol Kishore Ghosh said Pandey hailed from Gopalganj. “He has been serving here for the last 40 years. He went for a morning walk every day as he had diabetes.”

Police and RAB officials cordoned off the crime scene after arriving there. But they could not say anything else regarding the assailants and their motives.

Local NGO worker Naresh Madhu said: “He (Pandey) lived here for a long time. He became one of us. He was a simple man who had no enemies.”

He suspected that militants were behind Pandey’s murder.

A number of murders carried out in similar fashion across the country in the past two years have sparked public outrage.

The victims of these attacks include secular writers and bloggers, online activists, publishers, foreigners, members of various religious minorities and rights activists.

Police have blamed Islamists for these killings, most of which took place in the northwest region of the country.

Middle East-based militant groups Islamic State and al Qaeda had reportedly claimed credit for many of these killings. But the government has rejected their claim every time and said home-grown terrorists and militants were responsible.