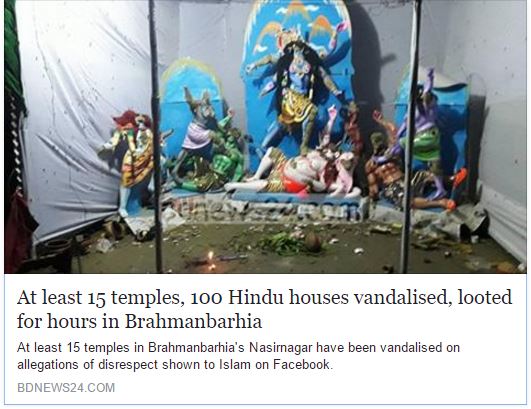 Over 100 houses belonging to Hindus in the area have also been vandalised and looted. 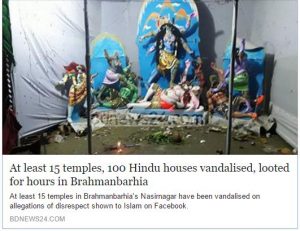 After the mayhem for hours on Sunday afternoon, two temples in adjacent Habiganj’s Madhabpur came under attack, police and witnesses said.

Six persons were arrested for their alleged involvement in the attack.

Border Guard Bangladesh has been deployed in Nasirnagar and Madhabpur Upazila headquarters along with the Rapid Action Battalion, police and Armed Police Battalion.

The district’s Deputy Commissioner Rezwanur Rahman and Superintendent of Police Mizanur Rahman inspected the area later in the afternoon.

But the leaders of the local Hindu community say the panic that has gripped them is not going away.

In January, a music college named after the renowned composer and music teacher Ustad Alauddin Khan was vandalised in the district following the death of a madrasa student.

Sunday’s attack was carried out in a style followed by the attackers of Buddhist community at Ramu in Cox’s Bazar in 2012 on a similar allegation of disrespect towards Islam through a Facebook post.

Police detained Rasraj on Friday immediately after the allegation of blasphemy had surfaced against him.

He was sent to jail following a court order, SP Mizanur said.

Protests against Rasraj’s post were called under the banner of ‘Ahle Sunnat Wal Jamaat’ in Habiganj district headquarters and Nasirnagar. Demonstrations were also announced in Habiganj’s Madhabpur.

A group of madrasa students demonstrated on the premises of Brahmanbarhia Press Club while hundreds of people blocked Sarail-Nasirnagar-Lakhai road by torching tyres on Sunday afternoon.

SP Mizanur, quoting witnesses, said a group of the demonstrators, armed with local weapons, vandalised the temples at Duttubarhi, Namashudraparha and Ghoshparha, and Jagannath Temple and Goura Temple.

They also vandalised and looted the houses of the Hindu families. Several priests were injured in the attack, the SP said.

One platoon of BGB was deployed first to bring the situation under control. The other forces joined them later.

SP Mizanur said preparations to file separate cases over the attacks were under way. Six suspected attackers have been arrested, he added.

Deputy Commissioner Rezwanur told the media that those responsible for the attack would get ‘exemplary’ punishment after investigation.

Madhabpur Upazila Puja Udjapon Committee chief Sunil Das said the members of the religious minority community were pained by the attack, which was carried out a day after Kali Puja.

“The opportunist quarter carried out this attack to embarrass the government. Those behind it will be found out and dealt with in a tough manner,” he said.