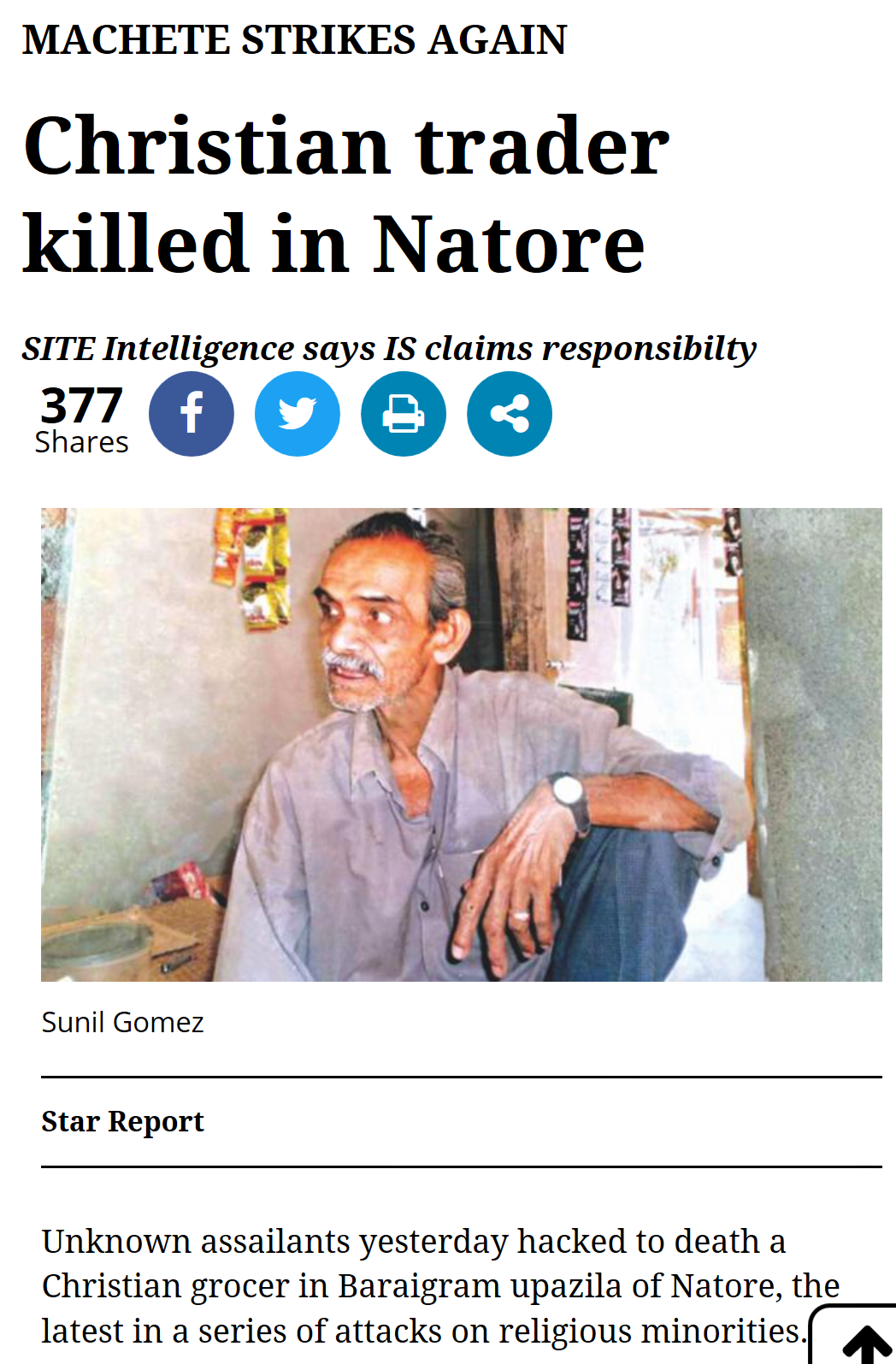 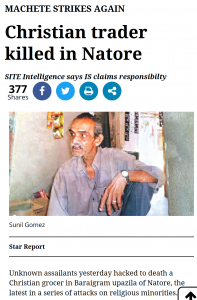 Unknown assailants yesterday hacked to death a Christian grocer in Baraigram upazila of Natore, the latest in a series of attacks on religious minorities.

Sixty-year-old Sunil Gomez was alone in his shop at Bonpara Christian Palli in the upazila around noon after offering Sunday prayers, said family members and locals.

The assailants hacked him there, leaving him dead, said Shymol Kumar Mukharjee, superintendent of police in Natore.

There were hacking marks in his neck, said police.

Law enforcers picked up Sabuz Hossain, 35, a tenant of Sunil, on suspicion over the killing.

The area where Sunil, father of two, lived for years is predominantly Christian. His grocery shop was adjacent to his house, said locals.

Hours after the incident, global terror outfit Islamic State (IS) claimed responsibility for the killing, according to SITE Intelligence Group that monitors terrorist activities.

Apart from this one, as many as 13 more attacks since the beginning of this year had suspected militant links.

Inam Ahmed, inspector of the Criminal Investigation Department in Rajshahi, who visited the crime scene, said the attack had similarities with previous militant attacks on free thinkers and people belonging to differing faiths.

Sunil’s wife Jasinta Gomez had gone to her father’s house in Pabna to see an ailing relative.

His daughter Swapna Gomez, 32, lives in an adjacent village while his son Swapan Gomez died several years ago in an accident.

Swapna said her father had 10 decimals of land on which he had built the house. A portion of the house was rented out to tenants.

“My father had no enmity with anyone,” said a crying Swapna.

She told BBC Bangla Service that her father went to a local market to buy goods for his shop around 11:00am and came back around 45 minutes later.

Abdul Hai Talukdar, officer-in-charge of Detective Branch of Police in Natore, said the motive behind the killing was unclear.

Family members said they found some money in his hand after the attack.

Shukhi Begum, a tenant of Sunil, said she was asleep in her room when the incident took place and that she did not hear any screams or noises.