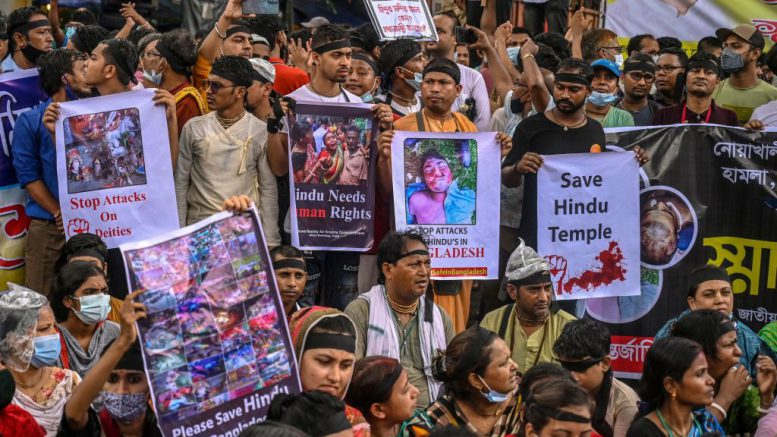 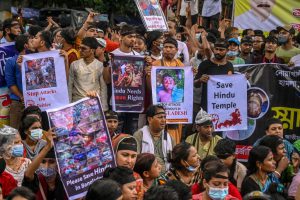 Responding to the violent attacks on Hindu minority households and temples in Bangladesh during and after the Durga Puja, the country’s biggest Hindu festival, Amnesty International’s South Asia Campaigner, Saad Hammadi, said:“Reports of a spate of attacks by angry mobs against members of the Hindu community, their homes, temples and puja pandals during the country’s biggest Hindu festival are symptomatic of the growing anti-minority sentiment in the country. Such repeated attacks against individuals, communal violence, and destruction of the homes and places of worship of minorities in Bangladesh over the years show that the state has failed in its duty to protect minorities.

“Targeting religious sensitivities to stoke communal tension is a serious human rights violation and requires immediate and decisive action from the government to address the situation of minorities in the country.

“We urge the authorities to take urgent steps to protect the members of the minority community against such attacks and ensure access to justice and effective remedies for victims. The authorities must promptly, thoroughly, impartially and transparently investigate the incidents and bring those suspected to be responsible for the violence and vandalism to account through fair trials.”

Violence erupted in Bangladesh following allegations on social media that a copy of the Quran, the holy book of Islam, was desecrated at a puja pandal (temporary structures made for the religious ceremony) in Cumilla on 13 October 2021. At least seven people have been killed, and hundreds have been injured in clashes that broke out across Bangladesh since 13 October.

According to local reports, at least 25 houses and shops belonging to members of the Hindu community were torched in Rangpur, a northern district of Bangladesh on 17 October. The country’s information minister Hasan Mahmud warned about further attacks.

Teachers and staff from Dhaka University have today blocked a major intersection in the city in protest against the ongoing violence.

The police have filed at least 46 cases against 10,000 unidentified people for the violence and vandalism across the country.

Authorities had filed eight cases accusing thousands of people when hundreds of homes, businesses and temples belonging to Hindu families were set on fire in Nasirnagar in 2016 based on social media posts that alleged insult to Islam. In 2012, at least six Buddhist temples and several homes were torched apparently over a Facebook post allegedly defaming the Quran.