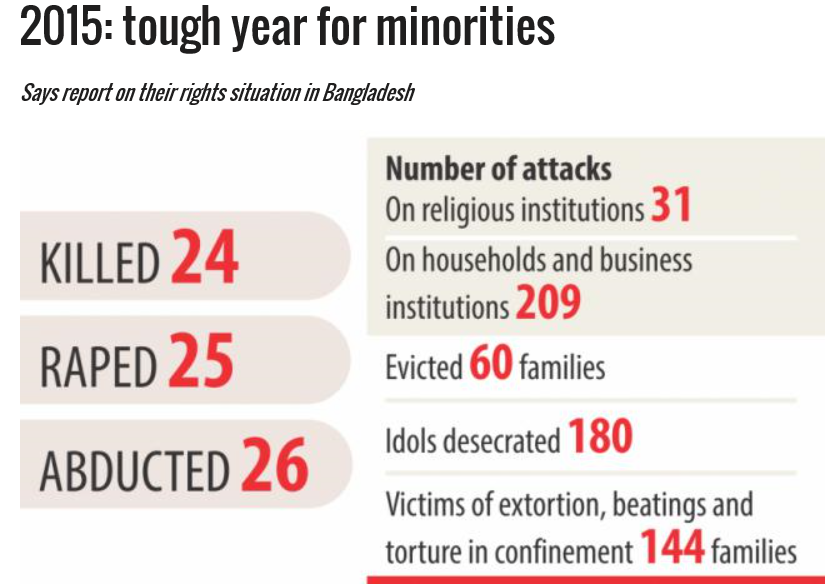 Says report on their rights situation in Bangladesh Staff Correspondent
Some 24 people were killed, 25 raped and 1,562 families were affected in 262 incidents of minority persecution in the country last year, said a report of Bangladesh Hindu-Bouddha-Christian Oikya Parishad.

The incidents include attack on religious minorities, abduction and rape, looting and destruction of households, business establishments and temples, land grabbing, eviction of minorities from houses, forced religious conversion and extortion.

In most cases, the perpetrators used political power and influence, said the report titled “Human Rights Situation of Minorities in Bangladesh-2015”.

Involvement of some ministers, lawmakers and their followers in attacks on minorities has been exposed by the media. But they haven’t been brought to book yet, added the report, released through a press conference at Dhaka Reporters’ Unity yesterday.

“We have noticed that influential persons sheltered by the ruling party continuously committed these crimes in 2015,” said Rana Das Gupta, general secretary of the Parishad, while addressing the press conference.

Local activists of the ruling Awami League, the BNP and other political parties join hands together to evict minorities. All of them show similar attitude to minorities, said the report, based on write-ups in 14 newspapers and police information.

Greed for land prompts influential quarters to persecute minorities. It has been noticed that most of the land grabbers belong to the ruling party and the victims become helpless before their power and influence.

Police in many cases show reluctance to record complaints and even back influential people in grabbing land of the minorities.

Besides, criminals sexually harass and rape minority girls to create panic among the community. Attacking temples and desecrating idols have also become common.

Because of all this, minorities are compelled to leave their houses, land and even the country.

“What is most alarming is that the state is not paying much attention to the issue,” said the report.

Things have worsened due to the culture of impunity. Specially, the hope for justice gets thinner when any ruling party man is involved in the crimes. If this situation continues, religious minorities will become extinct in Bangladesh, it added.

“We demand that Bangladesh will be a secular country where equal rights of all communities will be ensured,” said Rana Das Gupta.

Around a dozen top leaders of the Parishad attended the press conference.